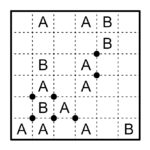 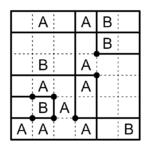 Draw vertical and horizontal lines along the gridlines, going from one grid edge to any other grid edge, i.e. no loops within the grid. The lines can make 90° turns only where black dots are located. Divide the grid into regions where each region contains only A or only B, i.e. not both, and not empty. Lines may cross each other anywhere except at the black dots. All black dots need not necessarily be used.

First appeared on Nikoli vol 123 (2008) under the name 新・快刀乱麻 (Shin Kaitoranma). Invented by ゴマ卵 (Gomatamago). Later renamed to ヤギとオオカミ (Yagi To Okami, lit. "Goats and Wolves") on vol 125. The English name is a contraction of this new name.

Retrieved from "https://wpcunofficial.miraheze.org/w/index.php?title=Yagit&oldid=1780"
Categories:
Cookies help us deliver our services. By using our services, you agree to our use of cookies.