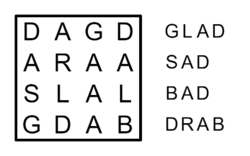 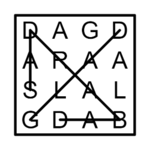 Locate the list of words in the grid. Words always appear in a line in one of the eight standard directions.

Norman E. Gibat was a printing business owner in Norman, Oklahoma. In March 1968, he published his first Word Search puzzle in "Selenby Digest", an ad digest. It used names of cities in Oklahoma.[1]

Exactly when Pedro Ocón de Oro published his first Word Search is unknown, but the Spanish Wikipedia [2] claims him to be the inventor. He directed a biweekly publication of Word Searches, "Sopa de Letras" ("Alphabet Soup"), first published in 1976. 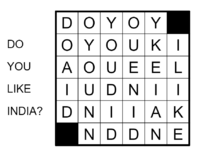 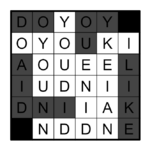 First appeared on WPC 2017/Round 9. Author of the puzzle was Rohan Rao (India). See also Snake. This is quite different from normal Word Search, as this incorporates logic from object placement quite heavily.

Find the given list of words in the grid. Each word is in the form of a Snake. A snake cannot touch/cross itself or other Snakes, even diagonally. The letters in the Snake must follow the same order as the word. Black cells cannot be visited by Snakes.

Ignore any punctuation, numbers or special characters in the words.

Retrieved from "https://wpcunofficial.miraheze.org/w/index.php?title=Word_Search&oldid=2278"
Category:
Cookies help us deliver our services. By using our services, you agree to our use of cookies.