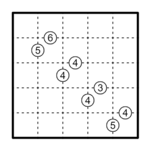 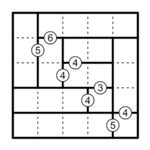 Divide the grid along the given lines into some squares and rectangles. A number between two regions must be equal to the sum of the areas of these regions. Numbers always lie at borders, not inside the regions. There can be rectangles that do not touch any of the given clues.

Invented by Naoki Inaba (Japan) in 2003. First appeared on his website.[1]

Retrieved from "https://wpcunofficial.miraheze.org/w/index.php?title=Twin_Rooms&oldid=2301"
Categories:
Cookies help us deliver our services. By using our services, you agree to our use of cookies.