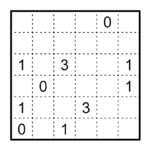 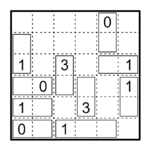 Locate some blocks in the grid, having the size either 1×2 or 1×3. Each number in the grid should be part of a block, indicating the amount of the possible movements of the blocks. Blocks can only move in the direction of their short edge.

Invented by Shinichi Aoki (Japan) in 2006. First appeared on 2006 Japanese Nationals (2nd round). Original name パーキング is a transliteration of "parking."

The name Tren was given to by Serkan Yürekli in 2008. It means "train" in Turkish language. 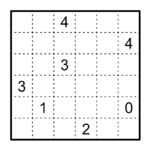 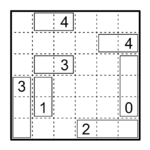 Regular Tren rules. In addition, all cells that are not part of any block must be connected.

Retrieved from "https://wpcunofficial.miraheze.org/w/index.php?title=Tren&oldid=1702"
Categories:
Cookies help us deliver our services. By using our services, you agree to our use of cookies.