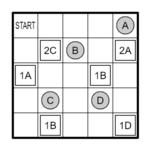 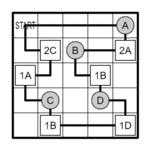 Find the path of the transporter so he can deliver all transport orders.

The path must begin in the cell marked START, run horizontally and vertically and finish in the starting cell again, without using any cell more than once. The cubes represents objects that have to be delivered to their respective destination, namely the grey circles; the letters indicate where the objects have to be delivered. Whenever the transporter reaches a cell with a cube, he picks up an object; whenever he reaches a destination, he unloads all objects with the matching letter. On his path, the transporter has to pick up and deliver all objects.

The numbers inside the cube indicate the size of each object. The transporter has a limited capacity that cannot be exceeded at any time. The capacity will be different for each puzzle and is given below each grid.

Retrieved from "https://wpcunofficial.miraheze.org/w/index.php?title=Transporter&oldid=333"
Categories:
Cookies help us deliver our services. By using our services, you agree to our use of cookies.