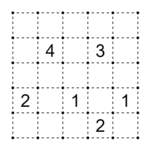 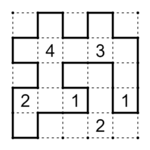 First appeared on Hausigel Contest Series 6 in 2013. The puzzles were written by Roland Voigt (Germany).

Obviously, the inventor intended this as a Slitherlink variant, but this puzzle solves quite differently from normal Slitherlinks. The fact that Slitherlink is known in German as "Rundweg" which means simply "loop" may be one cause of the naming. 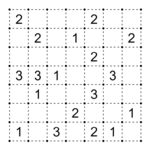 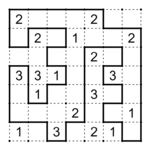 Draw a closed loop along the dotted lines that uses each grid point at most once. Numbers that are inside the loop indicate how many edges of the respective cells are part of the loop, as in a standard Slitherlink. Numbers that are outside the loop indicate how often the loop visits the respective cells. In this context, a “visit” is defined as a contiguous section of the loop travelling on the boundary of the cell in question, including the possibility of just a single corner point; two such sections are considered separate visits if the loop leaves the boundary of the cell between them.

Retrieved from "https://wpcunofficial.miraheze.org/w/index.php?title=Touching_Slitherlink&oldid=2657"
Categories:
Cookies help us deliver our services. By using our services, you agree to our use of cookies.