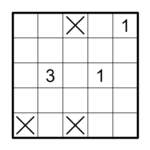 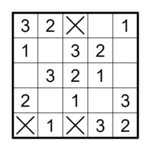 Place numbers into some cells so that each number in the provided range appears exactly once in each row and column. Cells may remain empty. A cell cannot contain more than one number. Some numbers are already given for you. Some cells are marked with an 'X'; you may not put a number in those cells. If two cells touch vertically, the number on top must be greater than the number on the bottom.

Exact origin is unknown, but 10th Japan Puzzle Championship (2001) included the puzzle. Serkan Yurekli (Turkey) introduced the puzzle to the world, incorporating the puzzle within OAPC and WPC 2009. In the instruction booklet he cites Japan Number Place Championship as the original idea, which probably means 2009 edition of it.

Appearances in the past WPC[edit]

Retrieved from "https://wpcunofficial.miraheze.org/w/index.php?title=Top_Heavy&oldid=124"
Categories:
Cookies help us deliver our services. By using our services, you agree to our use of cookies.