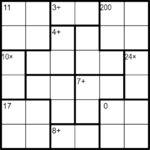 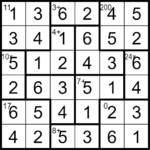 Place a number from 1 to X into each cell so that each number appears exactly once in each row and column. (X is the number of cells in each row.) Numbers may repeat within a region. The number in the upper-left corner of each outlined region indicates the value of one of the four basic operations applied to all numbers in the region, starting with the largest number for subtraction and division (e.g., 1, 2, 4 with division has a clue of 2÷ as 4÷2÷1=2). The operation may or may not be given in the region, but at least one of the four operations must apply.

KenKen (original title 賢くなるパズル ("puzzle that makes you smart")) was invented in 2004 by Tetsuya Miyamoto. KenKen featured mostly the same rulesets as TomTom. However, in KenKen, (i) every region were supplied with both numbers and operations and (ii) "-" and "÷" clues appeared only on regions with 2 cells.

The New York Times started publishing automatically generated KenKen puzzles daily on February 2009. Unsatisfied of the quality of the puzzle, Thomas Snyder (USA) started publishing his own version of the puzzle in March 2009.[1] He removed (i) and (ii) restriction by introducing new rules and named his version "TomTom" after himself when he published his TomTom book in 2010.

Retrieved from "https://wpcunofficial.miraheze.org/w/index.php?title=TomTom&oldid=2166"
Categories:
Cookies help us deliver our services. By using our services, you agree to our use of cookies.