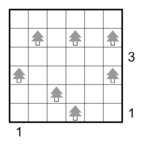 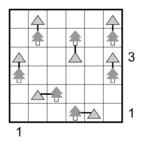 Place tents into the empty cells in the grid, at most one tent per cell. Tents may not be in adjacent cells, not even diagonally. There must be the same number of tents and trees. The tents and trees must match up in such a way that each tent is orthogonally adjacent to its own tree. (It is permissible for a tree to be adjacent to a tent that matches with another tree.)

(Rule and example from PGP IB) 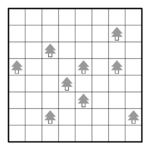 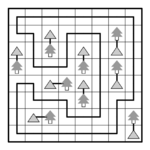 Normal Tents rules apply. Then draw a loop that visits every cell except for those occupied by trees or tents. The loop moves orthogonally between the centre of cells and does not touch or cross itself.

Retrieved from "https://wpcunofficial.miraheze.org/w/index.php?title=Tents&oldid=2282"
Categories:
Cookies help us deliver our services. By using our services, you agree to our use of cookies.