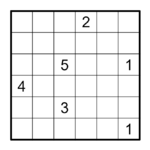 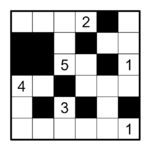 Shade some empty cells so that shaded sections form squares and a number in a cell indicates the total of the areas of the squares touching that cell by a side. All white cells must form a single connected area. Cells with numbers remain white.

Retrieved from "https://wpcunofficial.miraheze.org/w/index.php?title=Tasquare&oldid=1553"
Categories:
Cookies help us deliver our services. By using our services, you agree to our use of cookies.