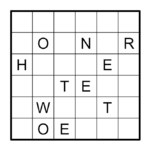 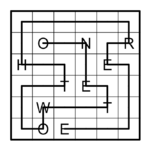 Draw a path passing through the centres of all cells horizontally and vertically. All words from the given list must be read along the loop only in a single direction in the given order.

First appeared on Japan Nationals 2006. Author of the puzzle is unknown. Sutuna is probably the contraction of 数字つなぎ (Suji Tsunagi, lit. "Number Connection"). There were a puzzle named 数字つなぎ (known in English as Number Connection) prior to Sutuna. The naming is most likely to signify that Sutuna is a variant of Number Connection with word puzzle element.

Retrieved from "https://wpcunofficial.miraheze.org/w/index.php?title=Sutuna&oldid=2067"
Categories:
Cookies help us deliver our services. By using our services, you agree to our use of cookies.