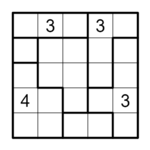 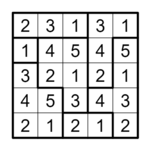 Place a digit in each empty cell such that every thickly outlined region of size N contains all digits from 1 to N. The same digits do not touch each other, even diagonally.

Invented by Naoki Inaba (Japan) in 2001 under the name "ナンバーブロック" ("Number Block"). [1] The name "Suguru", a contraction of "Suji gurupu" ("Number group") is given by Puzzler Magazine (UK) since, according to them, the original name "did not sufficiently reflect the qualities of" the puzzle. [2]

Retrieved from "https://wpcunofficial.miraheze.org/w/index.php?title=Suguru&oldid=1595"
Categories:
Cookies help us deliver our services. By using our services, you agree to our use of cookies.