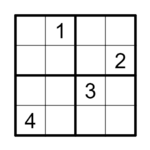 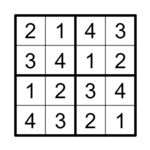 Place a digit from 1-9 in each empty cell in the grid such that each row, column and marked 3x3 box contains each digit exactly once.

Although Latin squares has been known since 18th century, the introduction of boxes were first done by Howard Garns (USA). Originally named "Number Place," the puzzle was first published in 1979 by Dell Magazines.

The name 数独 ("Sudoku") was given to this puzzle by Maki Kaji in 1992, as a contraction of 数字は独身に限る, meaning "numbers are limited to being unmarried."

Listed here are appearances of classic Sudokus. For variants, see list of Sudoku variants#Appearances in the past WPCs.

Retrieved from "https://wpcunofficial.miraheze.org/w/index.php?title=Sudoku&oldid=1965"
Categories:
Cookies help us deliver our services. By using our services, you agree to our use of cookies.