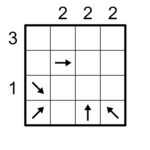 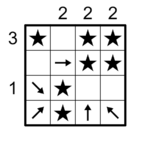 Place some stars into the grid, so that each arrow points to at least one star and for each star there is at least one arrow pointing at it. Stars cannot be placed in cells with arrows. The numbers indicate how many stars appear in the respective row or column.

Probably of German origin but not ascertained. Since an appearance in 1995 German Nationals is recorded,[1] the puzzle is at least older than that.

The name Sternenhimmel is a combination of two German words, Sternen ("stars") and Himmel ("sky").

Retrieved from "https://wpcunofficial.miraheze.org/w/index.php?title=Sternenhimmel&oldid=1997"
Categories:
Cookies help us deliver our services. By using our services, you agree to our use of cookies.