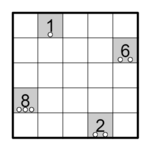 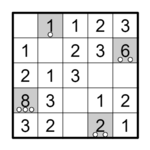 Place a digit from 1 to N into some cells so that each digit appears exactly once in each row and column. Cells may remain empty. A cell cannot contain more than one digit. Some clues are given in the grid; digits should not be placed in cells with clues. Each clue describes the contents of the cells next to that clue (horizontally or vertically, but not diagonal). The number in the clue indicates the sum of the digits next to the clue, while the number of circles beneath the number indicates the number of cells that should have a digit placed in them.

First appeared on 2013 UKPA Open.[1] Author of the puzzle was Matej Uher (Slovakia).

Retrieved from "https://wpcunofficial.miraheze.org/w/index.php?title=Slovak_Sums&oldid=2214"
Categories:
Cookies help us deliver our services. By using our services, you agree to our use of cookies.