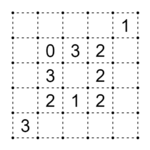 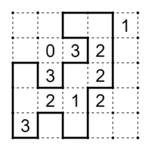 Draw a single, non-intersecting loop that only consists of horizontal and vertical segments between the dots. A number inside a cell indicates how many of the edges of that cell are part of the loop. 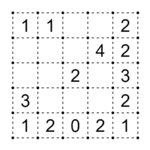 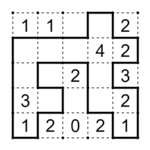 First appeared on 8th 24-Hour Puzzle Championship (2007).[1] The author of the puzzle was Serkan Yürekli (Turkey).

In the original puzzle by Serkan, the roles of inside and outside clues were the other way around. Commonly presented as an inside/outside Slitherlink variant, this puzzle is actually closer to shading puzzles (consider inside/outside patterns around clues). 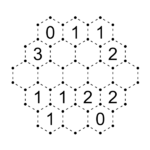 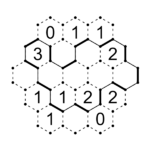 First appeared on LMD portal in 2013. Author of the puzzle was Christian Halberstadt (Germany). Grid is Hexagonal by default because of parity.

Draw a closed loop along the dotted lines that uses each grid point at most once. A person walks along the loop, alternating between their left and right foot, always one edge per step. The numbers indicate how many steps on the edges of the respective cells that a person makes with their right foot. 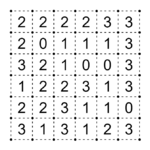 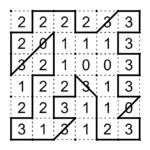 First appeared on Puzzle Marathon contest on LMI in 2013. Author of the puzzle was Jakub Hrazdira (Czech Rep.)

Standard Slitherlink rules apply. However, exactly one number in each row and each column is wrong (value of that number doesn’t correspond with the number of square edges used by loop). Moreover, each square with the wrong number should be crossed by loop diagonally.

Hybrid with Cave clues. First appeared on WPC 2019/World Cup Round 2. Author of the puzzle was Jürgen Blume-Nienhaus (Germany).

Originally the puzzle was presented like Bosnian Road. It took the current form when Nikoli merged the elements of a different puzzle called ナンピツ ("Nanpitsu," suggested by 轟由紀 ("Todoroki Yuki"), first appeared also in 1989).

Retrieved from "https://wpcunofficial.miraheze.org/w/index.php?title=Slitherlink&oldid=2335"
Categories:
Cookies help us deliver our services. By using our services, you agree to our use of cookies.