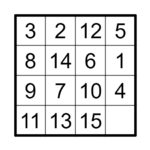 One possible starting configuration of the 15 puzzle

Slide pieces on the board so that they reach the given end configuration.

Most famous and earliest of sliding puzzles, the 15 puzzle, was invented by Noyes Palmer Chapman (USA) in 1874. The game was already popular in America in the 1880s. [1]

Since then, many variants have emerged. To name a few, Klotski was patented by Lewis W. Hardy (USA) in 1909. On-Off puzzle by Nob Yoshigahara (Japan) was used in a single-puzzle round in WPC 1992.

Retrieved from "https://wpcunofficial.miraheze.org/w/index.php?title=Sliding_Puzzle&oldid=1867"
Categories:
Cookies help us deliver our services. By using our services, you agree to our use of cookies.