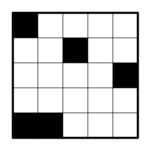 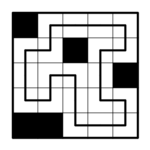 Draw a single closed loop (without intersections or crossings) through the centres of all white cells. Loop paths must be orthogonal.

In terms of graph theory, this is the Hamiltonian path problem on grid graphs. This concept is named for William Rowan Hamilton (Ireland) for inventing the icosian game in 1857.

Addition of object placement rules similar to Pentominoes (but not identical). First appeared on WPC 2018/Round 6. The puzzle was by Jiří Hrdina (Czech Rep.).

Place some pentominoes so that they don't touch each other even diagonally. One cell from each pentomino is already marked with a letter corresponding to the shape of the pentomino. Then draw a single closed loop through the centres of all white cells. 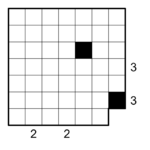 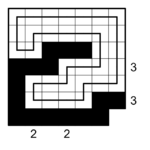 Hybrid with Snake. First appeared on WPC 2018/Round 6. The puzzle was by Jiří Hrdina.

Draw a snake and a single closed loop through all the remaining cells. The numbers outside indicate how many cells are used by the Snake.

Retrieved from "https://wpcunofficial.miraheze.org/w/index.php?title=Simple_Loop&oldid=2321"
Category:
Cookies help us deliver our services. By using our services, you agree to our use of cookies.