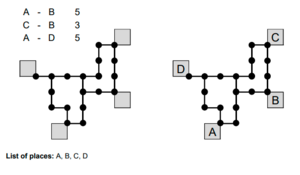 Most likely first appeared on WPC 2001 under the name "Star Tours". In that puzzle, the list comprised of the names of existing stars. Which round it did appear nor by whom was it written is unknown. [1]

Retrieved from "https://wpcunofficial.miraheze.org/w/index.php?title=Shortest_Distances&oldid=2127"
Categories:
Cookies help us deliver our services. By using our services, you agree to our use of cookies.