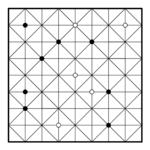 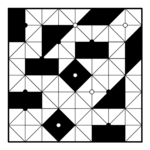 Shade some cells such that shaded cells form four-cell “shards” that may touch on a vertex, but not an edge.

All unshaded cells must be connected edge to edge.

Invented by Dan Adams (USA) in 2017 as a submission for Puzzle Innovations Contest, a pre-event of WPC 2017. This puzzle uses an unusual irregular grid, a common feature for Dan's puzzles.

Retrieved from "https://wpcunofficial.miraheze.org/w/index.php?title=Shards&oldid=1949"
Categories:
Cookies help us deliver our services. By using our services, you agree to our use of cookies.