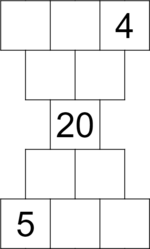 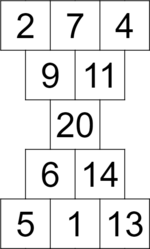 Place numbers in all the empty cells so that no number is repeated in the sandglass. Sum of two adjacent numbers in a row is written in the next row closer to the center of the sandglass in the cell placed next to both numbers.

Probably of Czech origin. Present in 2017 Czech Nationals.[1] The author of the puzzle is unknown, but is probably by František Luskač (Czech Rep.).

Retrieved from "https://wpcunofficial.miraheze.org/w/index.php?title=Sandglass&oldid=1048"
Categories:
Cookies help us deliver our services. By using our services, you agree to our use of cookies.