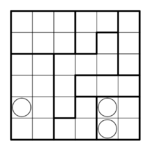 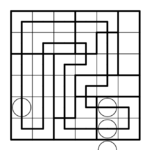 Draw a closed loop passing through centres of cells horizontally or vertically. The loop passes straight through all circled cells. The loop may or may not visit a region. The number of turns the loop makes in every visited region is constant across the grid.

While it has been invented a little earlier, this puzzle was first presented in WPC 2017/Round 2, "Indian Puzzle Land". Invented by Swaroop Guggilam (India).

The idea of constant amount of turns per region can be seen in Regional Masyu, also originally by Swaroop.

Retrieved from "https://wpcunofficial.miraheze.org/w/index.php?title=Regional_Loop&oldid=1362"
Categories:
Cookies help us deliver our services. By using our services, you agree to our use of cookies.