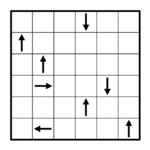 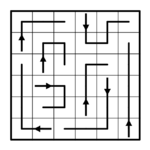 Draw paths from each each arrow such that all cells of the grid are visited by paths. A path can move only into the cell that is pointed at by the arrow, and then moving through the centres of cells horizontally or vertically. A path can visit either four or five cells including the cell with the arrow.

Invented by Anurag Sahay (India). The first puzzle was posted in Anurag's blog in January 2012.[1]

Retrieved from "https://wpcunofficial.miraheze.org/w/index.php?title=Reachability&oldid=1390"
Categories:
Cookies help us deliver our services. By using our services, you agree to our use of cookies.