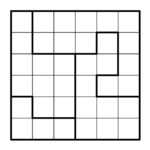 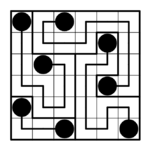 Thread a rope in each region. A rope is a path that passes through all cells of the region, between two cells that are end-points. End-points do not touch each other, even diagonally, even across regions.

Invented by Prasanna Seshadri (India) in 2017. First appeared on WPC 2017/Round 17, an innovatives round. The name Rassi Silai (रस्सी सिलाई) means "rope stitch" in Hindi.

Retrieved from "https://wpcunofficial.miraheze.org/w/index.php?title=Rassi_Silai&oldid=1935"
Categories:
Cookies help us deliver our services. By using our services, you agree to our use of cookies.