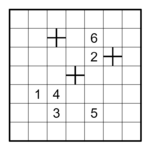 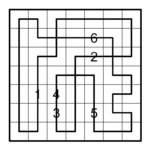 Draw a loop passing through centres of cells horizontally or vertically, passing through all circles. The loop must cross itself, but only in cells with a given '+'. The loop must pass straight through 'stations', i.e. numbered cells, and must travel in order from 1 to 2 and so on till N, where N is the highest number that will be placed in the grid, and then back to 1. No numbers and crosses can be placed in the grid apart from those indicated within the yarns.

Retrieved from "https://wpcunofficial.miraheze.org/w/index.php?title=Railroad_Tracks&oldid=1694"
Categories:
Cookies help us deliver our services. By using our services, you agree to our use of cookies.