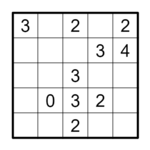 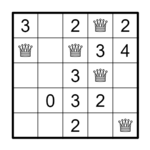 Place the given number of queens into the grid so that none of them stands on a number and each number equals to the number of directions from which the given square is attacked by a queen. A queen attacks to arbitrary distance horizontally, vertically and diagonally. Queens block other queens.

The name of this article is based on a puzzle from WPC 2005/Part 11, "Innovative" round.

However, a version of this puzzle that uses 5 different chess pieces appeared on December 1995 issue of GAMES magazine. Author of the puzzle was Rodolfo Kurchan (Argentina).[1]

Original title "Amenaza fantasma" was can be translated to "Ghost Threat". This name coincides with the Spanish title for the film Star Wars: Episode I - The Phantom Menace, but the film was released in 1999.

Retrieved from "https://wpcunofficial.miraheze.org/w/index.php?title=Queen%27s_Park&oldid=1735"
Categories:
Cookies help us deliver our services. By using our services, you agree to our use of cookies.