Fitting 12 pentominoes and a 2x2 square into 8x8 square was the first recorded pentomino puzzle, published by Henry Ernest Dudeney (USA) in 1907. The name pentomino was given by Solomon Golomb in 1953.[1]

This puzzle is the special version of more general classification, dissection puzzles. 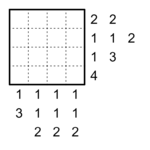 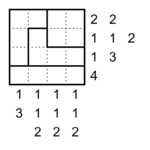 Boglár Major's (Hungary) set from the 8th 24-Hour Puzzle Championship contains one example of this puzzle that uses 7 tetrominoes. It is likely that the invention of this puzzle predates this.

Divide the grid into different pentominoes. The numbers next to rows and columns indicate the lengths of the individual pentomino segments in the given row/column. They are in increasing order.

Retrieved from "https://wpcunofficial.miraheze.org/w/index.php?title=Pentomino_Division&oldid=2325"
Categories:
Cookies help us deliver our services. By using our services, you agree to our use of cookies.