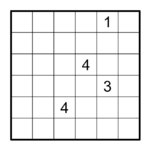 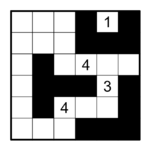 Place a number of different pentominos in the grid. Rotations and reflections are considered the same pentomino. The pentominos aren't allowed to touch each other, not even diagonally. The numbers in the grid indicate how many white cells can be seen from that cell in all horizontal and vertical directions, including the cell itself. Pentomino pieces block their sight.

Influenced by puzzles such as Pentominoes, Kuromasu and Cave, but is not a hybrid puzzle because the rules regarding connectivity of white cells are dropped.

Retrieved from "https://wpcunofficial.miraheze.org/w/index.php?title=Pentasight&oldid=1584"
Categories:
Cookies help us deliver our services. By using our services, you agree to our use of cookies.