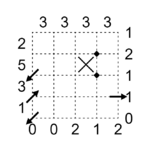 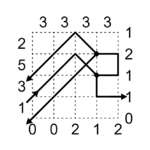 Find the path of a particle beam traveling through the grid.

Invented by Jürgen Blume-Nienhaus (Germany) in 2011. First puzzle made by him is on LMD portal.

The name refers to an old colloquial term in physics.

In particle physics, the term particle zoo is used colloquially to describe a relatively extensive list of the then known "elementary particles" by comparison to the variety of species in a zoo.

In the history of particle physics, the situation was particularly confusing in the late 1960s. Before the discovery of quarks, hundreds of strongly interacting particles (hadrons) were known and believed to be distinct elementary particles in their own right. It was later discovered that they were not elementary particles, but rather composites of the quarks. The set of particles believed today to be elementary is known as the Standard Model and includes quarks, bosons and leptons.[1]

Retrieved from "https://wpcunofficial.miraheze.org/w/index.php?title=Particle_Zoo&oldid=1752"
Categories:
Cookies help us deliver our services. By using our services, you agree to our use of cookies.