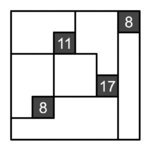 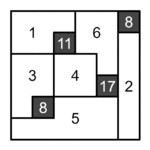 Assign one number from 1 to X to each region so that each number is used exactly once. The numbers in the shaded cells indicate the sum of the numbers in regions sharing at least one side with this cell. (each region is counted just once in the sum)

This article is named after a WPC 2018 puzzle, but similar puzzles have independently been published multiple times. Mathematically, this puzzle is just a set of Diophantine equations.

For example, the following is the rules of a puzzle called "Value Added" from WPC 1996: "Each of the rectangles has a value between 1 to 9. Each value occurs only once. When two or more rectangles overlap, their values are added. We have indicated some of these sums in the diagram. What are the values of rectangles A to I?"

This name was given to a puzzle in WPC 2018/Round 9. Essentially the same as Numbered Region, plus the rule on inside-outside difference.

Similar puzzle was present in a 2012 Czech competition ("Prostějov GP"). The puzzle was written by František Luskač under the name Čokoláda Orion ("Chocolate Orion", a Czech chocolate brand, whose logo is star-shaped).

Retrieved from "https://wpcunofficial.miraheze.org/w/index.php?title=Numbered_Regions&oldid=1855"
Category:
Cookies help us deliver our services. By using our services, you agree to our use of cookies.