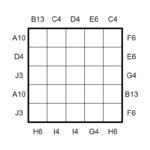 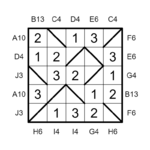 Place numbers from 1-N and two mirrors of different orientations in the grid so that each symbol appears exactly once in each row and each column. The hints around the grid indicate how the light travels through the mirror labyrinth. The same letters indicate the entrance and exit of the beam. The number is equal to the sum of numbers encountered on the way through the labyrinth. If the beam passes twice through the same number, this number is calculated twice.

Appeared on WPC 2018/Round 12, an "innovatives" round. The puzzle was written by Jiří Hrdina (Czech Rep.).

Retrieved from "https://wpcunofficial.miraheze.org/w/index.php?title=Mirror_Labyrinth&oldid=1173"
Categories:
Cookies help us deliver our services. By using our services, you agree to our use of cookies.