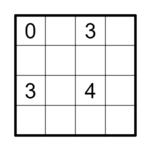 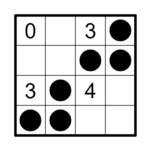 Place mines into the un-numbered cells in the grid, at most one mine per cell, so that each number in a cell represents the number of mines adjacent to that cell (including diagonally adjacent cells).

First Minesweeper game on PC appeared in 1983.[1] See the wikipedia article on the game for more details. 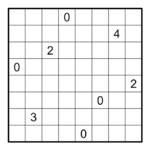 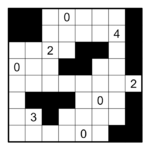 Probably the oldest of this type of variant is "Battleships varia #2" from WPC 1999/Part 9. It can be seen as Shape Minesweeper with a standard fleet of battleships as the given set of shapes.

This very generalised name was first used in 2015 Puzzle Grand Prix, 5th Round. Author of the puzzle was Thomas Snyder (USA).

Place all of the given shapes into the grid. The shapes may be rotated and/or reflected. Shapes cannot cover the numbered cells. Shapes cannot touch each other (not even diagonally). Numbered cells indicate how many of the surrounding cells (including diagonally adjacent cells) will contain a shape part.

Retrieved from "https://wpcunofficial.miraheze.org/w/index.php?title=Minesweeper&oldid=2340"
Category:
Cookies help us deliver our services. By using our services, you agree to our use of cookies.