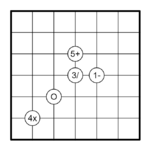 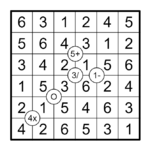 Enter numbers from 1 to X into the grid, so that each number appears exactly once in each row and column. Some grid points contain a clue consisting of a number and an arithmetic operator. The clue number must be the result of the given operator being applied to a pair of diagonally opposite adjacent cells, and it must be valid for both such pairs of cells. If a grid point is marked with an E (“even”) or O (“odd”), then all four adjacent cells must contain even respectively odd numbers.

Retrieved from "https://wpcunofficial.miraheze.org/w/index.php?title=Mathrax&oldid=1817"
Categories:
Cookies help us deliver our services. By using our services, you agree to our use of cookies.