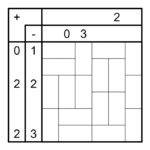 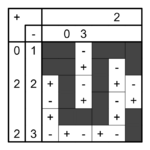 The grid is partitioned into regions of two square cells each (note that only region borders are drawn). Put "positive" (+) and "negative" (–) symbols into some cells, at most one symbol per cell, such that each region either has two symbols or no symbols at all. Adjacent cells (even within a region) cannot contain the same symbol. 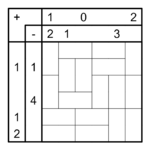 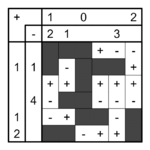 Fill the grid with neutral (shaded) and magnetic plates. Each magnetic plate has two poles, represented by + and − signs. Poles of different types that are part of different plates cannot be horizontally or vertically adjacent. The numbers indicate how many poles of the corresponding type appear in the respective row or column. 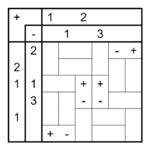 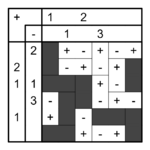 First appeared on WPC 2019/Round 8, a "Twilight" round. The puzzle was by Rainer Biegler.

Apply normal Magnets rules. Plates with given symbols can either be shaded or keep their poles. Their polarity cannot be reversed.

Retrieved from "https://wpcunofficial.miraheze.org/w/index.php?title=Magnets&oldid=2342"
Categories:
Cookies help us deliver our services. By using our services, you agree to our use of cookies.