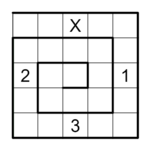 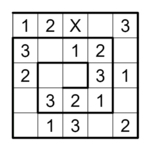 Place a digit from 1 to N into some cells so that each digit appears exactly once in each row and column. Cells may remain empty. A cell cannot contain more than one digit. Along the path of the “snail” indicated by the bold lines (starting from the outside and going towards the center), the digits must start with 1 and be in consecutive ascending order, starting over from the highest digit to the lowest (that is, 1-2-..-N-1-2-..-N-1-2...). Some numbers and empty cells (marked with ‘X’) may be already filled in the grid.

At least dates back to 2002. It was used as an assignment of a programming class in Budapest University of Technology.[2] This fact vaguely suggests the puzzle's Hungarian origin, but it is not a certain fact.

Hybrid with Easy as clues. At least present in 24hPC 2007 [3] but possibly predates this.

Place given set of letters so that they follow Magic Snail rules. The letters around the grid denote the first letter visible from the given direction in the given row, column or diagonal.

Invented by Rajesh Kumar (India) in 2010. [4] Hybrid with Skyscrapers clues.

Classic Magic Snail rules. In addition, the numbers represent heights of the buildings. The numbers around the grid indicate the number of buildings you can see from the given viewpoint.

Invented by Christian Halberstadt (Germany) in 2014. His first puzzle can be seen on LMD portal.

Enter numbers from 1 to N into the grid, so that each number appears exactly once in each row, column and outlined region. Cells marked with a − cannot contain any numbers. Within each region, it must be possible to find a path that runs horizontally and vertically through each cell exactly once, including those marked as empty, and along the path the numbers from 1 to 4 appear in order. Such a path cannot cross bold lines. If a region has an entrance from the outside, the path must start at that entrance, and starting from that entrance the number 1 must appear first on the path.

First appeared on WPC 2018/Round 5. The puzzle was by Jiří Hrdina (Czech Rep). 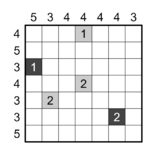 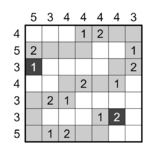 Hybrid with Snake. First appeared on WPC 2018/Round 5. The puzzle was by Jiří Hrdina (Czech Rep).

Draw a snake. The numbers around the grid indicate the number of cells occupied by the snake in the corresponding row/column. Some of the snake cells are numbered, following the Magic Snail rule with 1 to N, seen from the head of the snake to the tail.

Retrieved from "https://wpcunofficial.miraheze.org/w/index.php?title=Magic_Snail&oldid=1420"
Categories:
Cookies help us deliver our services. By using our services, you agree to our use of cookies.