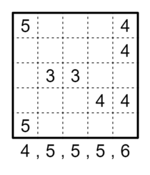 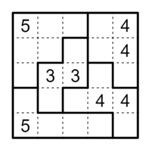 Divide the grid into regions of given sizes. Each number indicates the total number of cells within its region that can be seen horizontally or vertically from that cell, including the numbered cell itself. All numbers that are maximal within their region are given, and no other numbers are given.

Retrieved from "https://wpcunofficial.miraheze.org/w/index.php?title=Lookouts&oldid=1232"
Categories:
Cookies help us deliver our services. By using our services, you agree to our use of cookies.