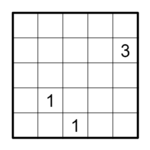 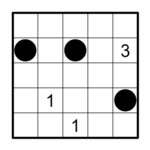 Locate ships in the grid such that each “lighthouse” (clue with a given number) indicates the number of ships in the same row or column as that lighthouse (it “sees through” other lighthouses and other ships). Each ship occupies a single cell and does not touch other ships or lighthouses, not even diagonally.

Probably first appeared on WPC 1993. The author of the puzzle is unknown.

Retrieved from "https://wpcunofficial.miraheze.org/w/index.php?title=Lighthouses&oldid=1551"
Categories:
Cookies help us deliver our services. By using our services, you agree to our use of cookies.