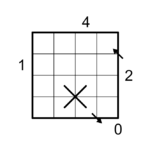 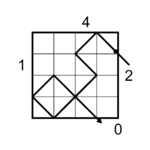 The arrow pointing into the grid tells you where the laser beam enters. Draw horizontal and vertical mirrors on the intersections of the grid, such that the laser leaves the grid as indicated by the other arrow. The numbers on the left and top tell you how often the laser beam passes through a field of that row/column. The numbers on the right and bottom tell you how many mirrors you have to put on the corresponding line. The laser beam crosses itself only at the marked places. It meets each mirror exactly once.

Retrieved from "https://wpcunofficial.miraheze.org/w/index.php?title=Laser&oldid=1211"
Categories:
Cookies help us deliver our services. By using our services, you agree to our use of cookies.