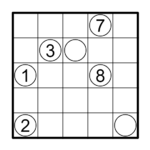 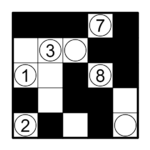 Shade some cells to form groups of connected shaded cells. These groups can touch each other diagonally. Cells with circles cannot be shaded. The numbers indicate the sum of the sizes of all such groups where at least one shaded cell is horizontally or vertically adjacent to the numbered cell. For cells without numbers, these sums are unknown.

Retrieved from "https://wpcunofficial.miraheze.org/w/index.php?title=Kurotto&oldid=1722"
Categories:
Cookies help us deliver our services. By using our services, you agree to our use of cookies.