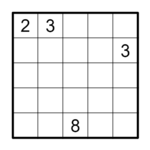 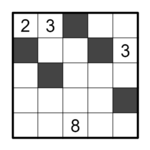 Shade some cells so that all remaining cells are connected orthogonally and no two black cells share an edge. Each numbered cell indicates the total count of unshaded cells connected in line vertically and horizontally to the numberer cell including the cell itself.

Retrieved from "https://wpcunofficial.miraheze.org/w/index.php?title=Kuromasu&oldid=1579"
Categories:
Cookies help us deliver our services. By using our services, you agree to our use of cookies.