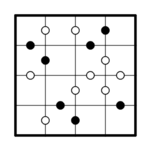 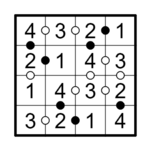 First appeared in Forsmarts contest as an instructionless puzzle.[1] The name was probably given when this puzzle appeared on WPC 2006/Part 2.

WPC 2016/Round 3 was a round solely consisted of Kropki variants. 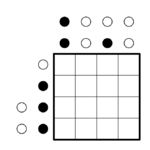 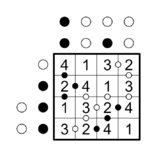 All dots from each row or column have been removed from the grid. They must appear in the corresponding row or column in the given order. There may be some gaps between the circles. All possible dots have been given.

(Rules and example from WPC 2016 IB, circles inside the solution grid are just for illustrative purposes.)

Retrieved from "https://wpcunofficial.miraheze.org/w/index.php?title=Kropki&oldid=2196"
Categories:
Cookies help us deliver our services. By using our services, you agree to our use of cookies.