Put a number in each cell without a number so that the number and arrow in each cell indicates how many different numbers exist in the direction the cell is pointing at (not including itself).

(Rule and example from PGP IB)

Invented by Masanori Natsuhara (Japan) in 1992. First appeared on July 1992 edition of the Puzzler magazine. 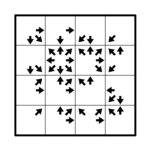 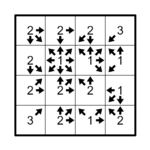 Enter a digit in every cell in the grid. The arrows indicate all of the 8 directions in which the number of different digits is equal to the number in the cell. All possible arrows are given.

Retrieved from "https://wpcunofficial.miraheze.org/w/index.php?title=Japanese_Arrows&oldid=905"
Categories:
Cookies help us deliver our services. By using our services, you agree to our use of cookies.