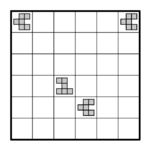 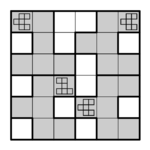 Probably first appeared on No Numbers, held by Ko Okamoto (Japan) in May 2012.[1] In Japanese, this puzzle is called 愛のカタチ (Ai No Katachi), which can be translated as "shape of love".

Retrieved from "https://wpcunofficial.miraheze.org/w/index.php?title=It%27s_Yours&oldid=1796"
Categories:
Cookies help us deliver our services. By using our services, you agree to our use of cookies.