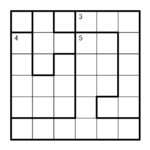 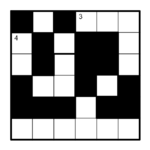 Shade in a polyomino in each thickly outlined region such that no two polymoinoes touch each other by a side, no two regions sharing an edge contain polyominoes of the same size, and a numbered region contains a polyomino of that size.

Retrieved from "https://wpcunofficial.miraheze.org/w/index.php?title=Islands&oldid=1717"
Categories:
Cookies help us deliver our services. By using our services, you agree to our use of cookies.