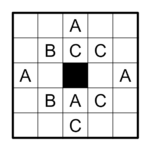 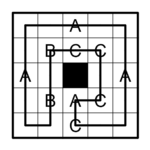 Draw a single closed loop that travels horizontally and vertically through the centres of all white cells. The loop cannot touch or cross itself. A set of letters that can never be consecutive along the loop is given; the letters along the loop are never an anagram of the given word.

First appeared on WPC 2016/Round 11, an "innovative" round. The author of the puzzle was Matej Uher (Slovakia).

A similar puzzle with all cells being occupied with numbers and the word being "ABCD" can be seen on Naoki Inaba's (Japan) website under the name アンイーブン ("Uneven"). [1]

Retrieved from "https://wpcunofficial.miraheze.org/w/index.php?title=Illiterate_Loop&oldid=2465"
Categories:
Cookies help us deliver our services. By using our services, you agree to our use of cookies.