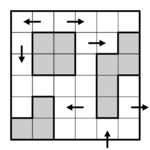 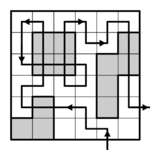 Draw a single path passing through the centres of some cells of the grid horizontally or vertically, from the arrow pointing into the grid to the arrow pointing out of the grid, which follows the directions of the arrows consistently. Lines that enter a grey area cannot change direction until they leave the grey area. Lines are only allowed to cross inside the grey areas. The path must go through every grey area at least once.

First appeared on Nikoli vol 108 (2004). Invented by 帆立 (Hotate). The original name アイスバーン is a transliteration of English "Ice Barn".

Retrieved from "https://wpcunofficial.miraheze.org/w/index.php?title=Ice_Barn&oldid=1787"
Categories:
Cookies help us deliver our services. By using our services, you agree to our use of cookies.