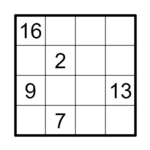 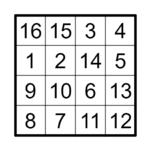 Enter a number into each empty cell, so that, including the given numbers, all numbers from 1 to X appear exactly once. (X is the number of cells) Consecutive numbers must be placed in horizontally, vertically or diagonally neighbouring cells.

The rule itself is quite simple and possibly re-invented many times. Four-direction version has been at least since 1981, where the puzzles were written by Steve Wilson (USA).[1]

Retrieved from "https://wpcunofficial.miraheze.org/w/index.php?title=Hidato&oldid=2213"
Category:
Cookies help us deliver our services. By using our services, you agree to our use of cookies.