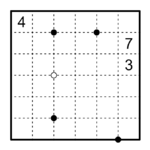 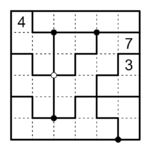 Draw vertical/horizontal lines along the dashed lines to divide the grid into regions. A region may contain at most one number, equal to the area of the region. No region may cover a 2×2 area. Some dots are “heavy” and have 3 or 4 lines connected to them. Black dots indicate heavy dots with exactly three lines; white dots indicate heavy dots with exactly four lines. Not all heavy dots are given, but there can be no heavy dots one cell-edge away from the indicated ones.

Invented by Prasanna Seshadri (India). The first puzzle appeared on The Art of Puzzles blog in May 2014.[1]

Retrieved from "https://wpcunofficial.miraheze.org/w/index.php?title=Heavy_Dots&oldid=1379"
Categories:
Cookies help us deliver our services. By using our services, you agree to our use of cookies.