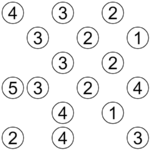 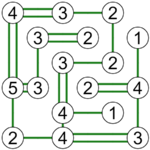 Draw some horizontal and vertical lines so that all the circles are connected (directly or through connections through other circles). No two circles may be directly connected by more than two lines. Lines may not cross other lines. If a circle is numbered, then that number represents the number of lines that are connected to that circle.

Retrieved from "https://wpcunofficial.miraheze.org/w/index.php?title=Hashi&oldid=720"
Categories:
Cookies help us deliver our services. By using our services, you agree to our use of cookies.