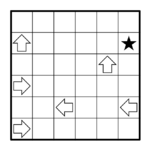 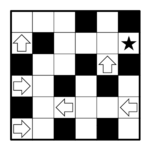 Shade some cells so that all remaining white cells form a single connected area. Shaded cells can't touch each other by a side. There can't be any 2x2 area of white cells. Cells with arrows or stars can't be shaded. Arrows indicate that this is the only direction to travel to the star horizontally and vertically over the white cells without backtracking.

Invented by Naoki Inaba (Japan) in 2004. First set of puzzles by Naoki can be seen in his website. [1]

This puzzle is more commonly known as "Compass". However, due to the name confliction with Compass by Silke Berendes, the original name given by Naoki was adopted for the title of this article. The name "Compass" derives from Compass Tapa, originated by Takeya Saikachi (Japan). [2]

Retrieved from "https://wpcunofficial.miraheze.org/w/index.php?title=Guide_Arrow&oldid=1767"
Categories:
Cookies help us deliver our services. By using our services, you agree to our use of cookies.